Deadwood Alive has been entertaining visitors for over 20 years with Main Street shootouts and regular performances of the Trial of Jack McCall. The Deadwood Alive troupe consists of over 10 characters which provide entertainment throughout the year including daily shootouts, guided walking tours, musical performances and the famous Trial of Jack McCall. Deadwood Alive is managed by a non-profit board of directors and employs up to a dozen individuals each summer to re-enact several historically accurate incidents of Deadwood’s past. The shows are a must see for Black Hills visitors each year.

On August 2, 1876, Jack (John) McCall, a little-known drifter, assassinated one of the most famous lawmen in the old West – Wild Bill Hickok. The dastardly murder took place in Deadwood’s Saloon No. 10. Jack was going by the alias of Bill Sutherland at the time. He was eventually hanged by the neck “until dead, dead, dead” for his despicable and cowardly crime on March 1, 1877. The role of “Crooked Nose” Jack McCall is shared by Sean Baxter and Luke Kitzmiller.

Sean Baxter
Sean Baxter is a “Hoosier” daddy from the great state of Indiana and now resides in Deadwood. He is an accomplished musician, playing the ukulele and guitar during the music shows on the street as well as at the Trial of Jack McCall. He is also a vocalist and songwriter. During the day he plays a variety of roles including a stage robber, a miner, a gunfighter, and a store clerk. Sean also plays Jack McCall at the Saloon No. 10 and has been with Deadwood Alive since 2009. 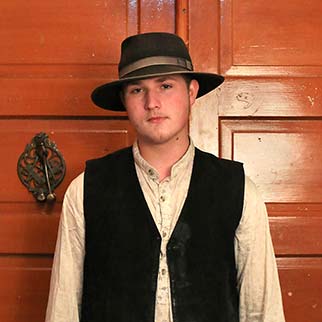 Luke Kitzmiller
Luke Kitzmiller lives in Belle Fourche and joined Deadwood Alive in 2014, although he has been following the troupe since the age of five. He has many different duties including setting up the equipment, keeping the public safe during the shootouts, playing several roles, singing, and telling Deadwood tales. Luke also portrays the Sundance Kid while on the street. 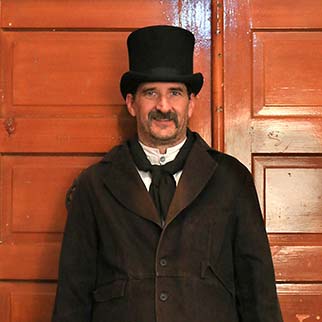 Joseph Miller - Defense Attorney
Portrayed by Travis Pearson
Joseph Miller was the first judge to be appointed in Dakota Territory. While in Deadwood, he also served on the City Council. At the time of the infamous Trial of Jack McCall, Judge Miller was retired. He came out of retirement to serve as the defense attorney in this miner’s court which illegally tried McCall.

Joseph Miller is portrayed by Travis Pearson. He may be recognized as the very same actor that plays Wild Bill Hickok. Travis is “shot” four times each day by “Jack McCall” and finishes out each night by defending him in court! Travis was born and raised in small town South Dakota and now considers the Black Hills his home for life. 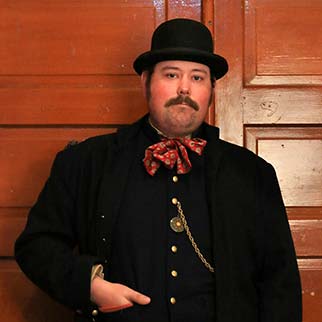 Colonel George May - Prosecuting Attorney
Portrayed by Ty Sanford
Colonel May was a prominent lawyer in Montana Territory, serving in Lewis and Clark County, the same county that Seth Bullock served as Sheriff. He even had a man draw his derringer on him during court. When the news of the gold strike in Deadwood Gulch reached May, he knew there would be a need for lawyers concerning mining rights and claims and he soon headed for the Hills. Upon arriving in Deadwood in the middle of July 1876, he set up a business with Captain Wm. Massie in the Custer House on Main Street. Col. May notably was the attorney prosecuting McCall, but he also helped defend another Deadwood resident later in August, Harry Young. When McCall was rearrested and sent to Yankton for his new trial, May followed him hoping for a second chance at prosecuting McCall, but fell ill and passed away soon after arriving in Yankton.

Colonel May is portrayed by Ty Sanford. Ty lives in Deadwood and has been with Deadwood Alive since 2011. His primary role on Main Street Deadwood is that of Daniel Boone May – no relation to his other character, George May. Boone May became known as a prominent citizen around town for his duties as a shotgun messenger on the Black Hills and Cheyenne Stage and as Deputy US Marshal. 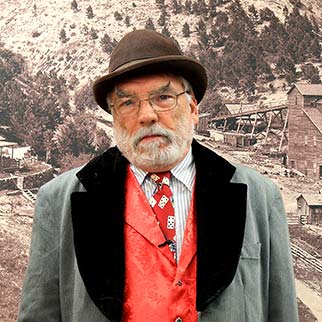 William L. Kuykendall - Judge
Portrayed by Raul Ponce de Leon
William Kuykendall was born December 13, 1835 in Clay County Missouri. He enlisted in the Army of the Confederacy during The War Between the States. Kuykendall participated in the battle of Carthage, the first battle of the Civil War, while holding the rank of Lieutenant.

Judge William L. Kuykendall is portrayed be Raul Ponce de Leon. He joined the acting troupe in 2017. Raul is a long-time Deadwood resident, living in a historic home. He is a tour guide, artist, western historian, and a member of the Deadwood Library board. 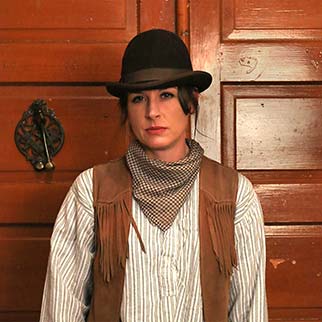 Calamity Jane - Bullwhacker, Scout, Sporting Girl
Portrayed by Jena Sierks
Martha Jane Cannary (or Canary), better known as Calamity Jane, was born May 1, 1852 in Princeton, Missouri. Calamity was the eldest of six children. In 1865, her father took his family west to Montana and then Utah. Martha's mom died in 1866 followed by her father in 1877. At age 15, she was thrust into the role of caregiver.

Calamity became a legend of the West while working as a bullwhacker, scout, a stagecoach driver, and a soiled dove. Some of her tales may have been true, but most grew bigger and bigger each time she entered a saloon.

Martha eventually arrived in Deadwood with Colorado Charlie Utter's wagon train on July 15, 1876. Although Hickok and Calamity came into town on the same wagon train (despite Calamity's insistence) there was never a "relationship" between the two. Three weeks after arriving in the Gulch, Wild Bill was shot. Calamity died August 1, 1903.

Calamity is portrayed by the dynamic Jena Sierks. Jena and Calamity are so alike in personality; it is sometimes hard to tell where Jena ends and Calamity begins. Originally from Nebraska, Jena has lived in Deadwood since 2013, and has howled up the streets of Deadwood with Deadwood Alive since 2014.

Charles Whitehead - Foreman of the Jury & Captain William Massey - Witness to the Murder
The roles of Whitehead and Massey are shared by Luke Kitzmiller (above), Lee Stroschine, Mike Kitzmiller, Jake Fogle, and Todd Weber 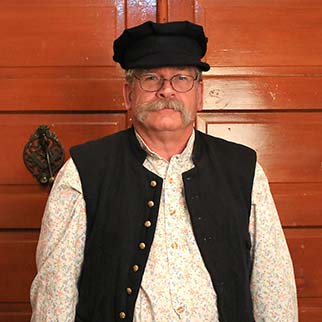 Lee Stroschine
When not performing in one of the shows, Lee plays the part of Theodore Roosevelt, explaining his connection to Deadwood’s history. Lee grew up in the Black Hills and attended college and earned degrees in history and education. He spent 20 years as an elementary school teacher prior to moving back to the Black Hills. He has been involved in sharing the history of Deadwood since 2012. When not sharing history in Deadwood, Lee is an author and works for the Sturgis Library. He co-authored the book “Fort Meade Peacekeeper of the Black Hills” in 2018. 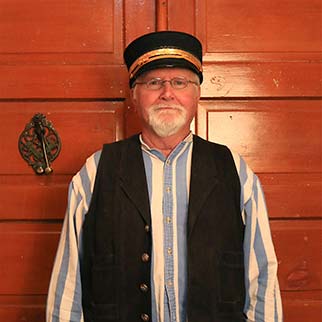 Mike Kitzmiller
Mike served 12 years active duty with the U.S. Navy and three years active duty in the U.S. Army before becoming a firefighter. He worked as a firefighter for two years in Colorado and 10 years in Rapid City, SD. He has lived in the Black Hills area for the past 25 years and loves what it has to offer. He and his wife Lisa own and operate Alkali Ike Tours in Deadwood and is father to Luke (above). 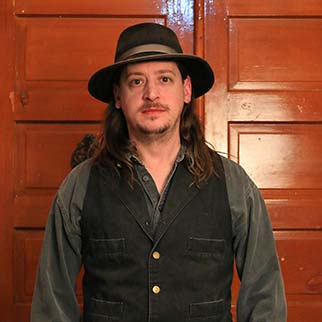 Jake Fogle
His fifth great grandfather was Mike Heffron, one of the first white men to enter Deadwood Gulch back in 1875. In 1879, he married Mary Manning, she was the youngest sister of John Manning who was the first elected Sheriff of Lawrence County (beating Seth Bullock in a landslide election). John Manning owned the Senate Saloon in 1876 and dealt cards there to Wild Bill. Since Uncle John and Grandma Manning's mother, Julia Manning, came in on the stage in 1878 this makes Jake a sixth generation Deadwood resident. His ancestors really played cards with Wild Bill Hickok. 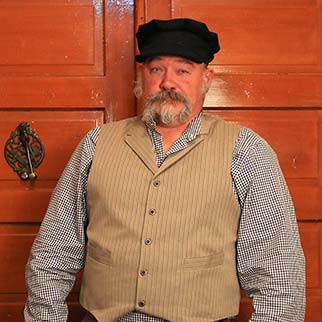 Todd Weber
A native of Palatine, Illinois, Todd got into acting in middle school and went on to work in the entertainment, film, and television industry for over 20 years. Todd moved to Deadwood in early 2019 with his wife Jill and mother-in-law Sally to open Shiloh Horse Rescue and Sanctuary. Todd started acting with Deadwood Alive in 2019. 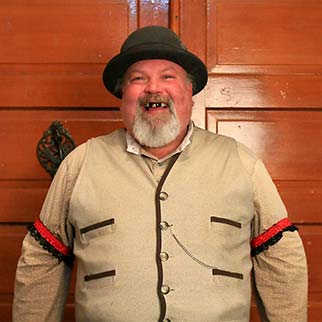 John Swift - Clerk of Courts
Portrayed by Andy “Cookie” Mosher
John A. Swift was born in Dublin, Ireland in 1844. In July 1863 Swift enlisted in the U.S. Navy. John worked as a landsman and a paymaster clerk until the end of the war. He came to the Black Hills of Dakota Territory in March 1876. He first lived in Custer, then Crook City, and finally Deadwood where he stayed until his death. During his stay in the “Hills”, his ability as a clerk and a penman was in constant demand.

John Swift is portrayed by Andy "Cookie" Mosher. He was born and raised in Concordia, Kansas and has lived in Deadwood since 2005. "Cookie plays resonator guitar and banjo, and also performs with the Deadwood Alive Gunslingers on Deadwood's Main Street. His main role on the street is City Marshal, Con Stapleton. Since joining the troupe in 2010, he has served in various capacities and is currently the Executive Director of Deadwood Alive.